Dr. Whitfield Diffie is one of NKN technical advisors. He is one of the inventors of Public Key Cryptography (Diffie-Hellman), and 2015 Turing Award winner. Dr. Stephen Wolfram, another technical advisor of NKN, is the founder and CEO of Wolfram Research, author of “A New Kind of Science” and pioneer researcher of Cellular Automata (CA). NKN’s novel Majority vOte Cellular Automata (MOCA) consensus algorithm is the first consensus algorithm based on Cellular Automata. MOCA is extremely efficient and horizontal scalable: it can achieve global consensus for millions or even billions of nodes in just a few seconds with neglectable resource utilization. MOCA has been extensively tested in NKN’s open testnet with more than 10,000 full consensus nodes globally from more than 50 countries for almost a year.

NKN advantages:
● Global Coverage: up to 10,000 global servers now, projected to reach 25,000 - 30,000 nodes globally by the end of 2019.
● Low Latency: there is always a few NKN nodes close to the clients with low latency.
● Low cost: community run NKN servers, whose fixed monthly costs have already been covered by NKN mining economy. And additional revenue from running value added services will be pure profit for the miners.
● Elastic Capacity: leverage unused capacity since NKN servers are multi-functional, that can scale up and down depending on demand.
● Advanced routing: can dynamically route traffic based on many parameters: bandwidth, latency, server load, and price.
● Reliability: compared to centralized systems, NKN network has no single point of failure and is fully distributed.
● Security and privacy: support both end-to-end and hop-by-hop encryption, without the need of Public Key Infrastructure (PKI) or 3rd party Certificate Authority (CA) 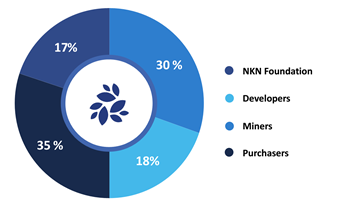