1. Brief Introduction
The Whole Network will be based on the value generated by user behavior, with the help of hardware terminals and user behavior incentives, to form a "behavioral value" network for everyone to use and benefit from.

2. Detailed Introduction
Whole Network is a value Internet based on a new working mechanism, which will really solve the problem of transformation, empowerment and transaction of user behavior value in the new blockchain network. And through the chain record of the user's behavior, to realize the link between the real world human behavior and the virtual world value transformation. As the carrier of Whole Network consensus dissemination and cohesion -- "Whole Network fuel" NODE is generated by users' behavior and contribution to ecological construction, mainly obtained through the use of triangle blockchain mobile phone. NODE is like the combustion of ecology, which promotes the operation of "ecological engine" and maintains the stable operation of ecology. 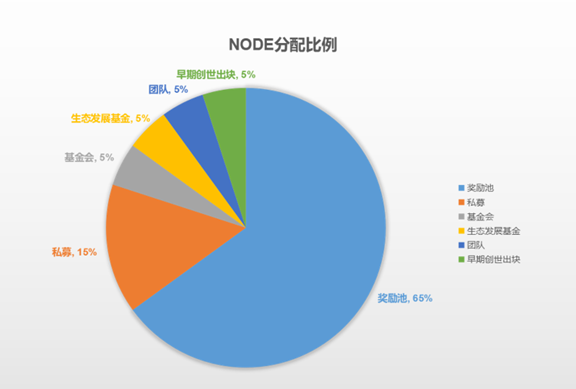 Ecological development fund: 5.0%
2% of the tokens are unlocked and will be used for marketing support and partner incentives to contribute to the long-term development of Whole Network. Lock the remaining 3% for half a year, and unlock 1% every month after half a year，unlock it for 3 months, 3% in total.

Foundation：5%
2.5% of the total tokens are held by the foundation and unlocked. The purpose of this part of unlocked tokens will be used by the team to maintain the development and operation ; Lock the remaining 2.5% in one month, unlock 1% in the second and third month respectively, and unlock the remaining 0.5% in the sixth month.

Reward pool: 65%
The node users who contribute to the behavior will be unlocked by linear reward through the whole network ecological mobile hardware terminal, and the earliest unlocking time is November 1, 2019.

Early release: 5%
4 per cent of them will be transferred through the Prime and the remaining 1 per cent will be initially unlocked.